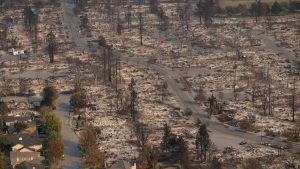 Over the past months, I have not posted much since my own life has been a bit off balance. Little could I have anticipated how my own family health issues would be dwarfed by nature in my own backyard. We’ve lived in Sonoma County for a little over a year, falling in love with the topography, agricultural connectedness and the moderate climate of the Bay Area. I have had many conversations now with people asking about the situation with “the fires”. It’s been a national story after all and my workplace Marin Biologic Laboratories is located in Marin County “the Gateway to the Wine Country”. This post is a summary of the recent events which are almost over in terms of the news cycle, but only just beginning for the families affected and the communities destroyed.

When one thinks of wildland fires, we generally don’t think of it sending embers into 50 mph+ winds to ignite a new location miles away. Yet, that happened. We expect homes on hillsides, buried in the trees to be at risk, but, not those in neighborhoods with sidewalks. The fires (at one point 13 different fires) killed 42 people and destroyed 7900 buildings. The previous worst California wildfire disaster was the Oakland Firestorm of 1991 which killed 25 and destroyed 2900 buildings. That fire was only 40 miles away.

That’s data. It would likely add acreage. That’s where the news tends to stop. I studied natural disasters in college at Cal. As a  result, my awareness goes beyond the news cycle. For those that might ask, here is a way to look more closely at what it’s like when a firestorm disaster strikes.

These fires were in Napa, Lake, Mendocino and Sonoma Counties. Sonoma County has 430,000 population. Santa Rosa, by far the largest city in all these counties, is home to 160,000. Santa Rosa has stated it lost 5% of the entire City’s housing inventory in the fire. That reflects 8000 people looking for housing – 3000-4000 familes. Napa, Lake and Mendocino counties also lost housing at varying lower quantities.

What is it like to immediately dislocate 3000-4000 familes in a city or 5000-6000 in a region, generally from contiguous neighborhoods? As an indicator of scale, last week AirBnB found 1000 people around a broader geographic region willing to offer space “for free” to displaced victims. 700 of those were picked up in the first few hours. That still leaves thousands looking for a place to live – for a long time.

There were also business losses. 500 Hotel rooms were lost in Santa Rosa, retail, small commercial, wineries, lots of them of varying sizes. A few thousand jobs are lost for some time, maybe forever.

But, that’s still just data, so let’s make it personal. The dermatology group where I am a patient has one office with 5 doctors and a total staff of 35. They now have 5 displaced people looking for “what’s next”. They have jobs, just nowhere to live. The Sutter and Kaiser Hospitals that were evacuated and closed for 3 weeks for recertification have 60 and 150 employees displaced respectively. Where do those people go? Where do they now spend their earnings for groceries or prescription meds? What do they drive if they lost a vehicle? How does that vehicle get financed?

Any existing business that relied on business from now displaced people will quickly suffer declines in revenue. Layoffs or closures would ensue. How do kids get to schools that are not near them anymore? How do schools maintain state payments per capita with classes down by 5 or 8 students every day going forward?

How many jobs are lost in the next 6 months by those businesses that tried to survive but could not straddle a 15-25% loss in their revenue?

If you listen to radio, you would hear ads from lawyers (to represent you against a yet to be defined utility). You would hear car dealerships offering employee pricing to qualifying victims. You would hear announcements of various meetings to inform people on the progress of cleanup (it’s hazardous) or reconstruction considerations (you can put an RV on your property once your property is cleaned up).

The 1000s of homes and businesses lost equate to tens of thousands of lives significantly altered. Recovery is still a long way away. Mother nature will repair most of the habitat damage quickly. The rainy season is beginning and goes full throttle in January. Grasses will be back next year. Not all trees burned, so the dead ones look burned out and the survivors thrive. This part of California has a resilience from fires. It’s normal to mother nature.

The emotions are raw and will be for months. The generosity is everywhere as the luck of the many creates a very clear empathy for the unlucky. As much as we all want “life to get back to normal”, that option has been physically altered. How normal is defined, getting used to whatever the new circumstances are for you, is not definable on a calendar and it is completely personal. And if you’re rebuilding, it’s measured in years. If you lost a loved one, it’s forever.

Santa Rosa and the counties will recover. Commerce continues. The days are still beautiful. The harvest is secure. For tens of thousands though, October 2017 will leave a scar that never goes away.

Here we stand at the Final Four of Baseball version 2018. When Willie Mays was traded from the Giants to the Mets in 1972, my enthusiasm for baseball declined and I became an A’s fan. In 1994 with the baseball strike, I threw in the towel and said baseball is not for me. Imagine my … END_OF_DOCUMENT_TOKEN_TO_BE_REPLACED

In the dynamic landscape of how we as consumers go about acquiring all the things we seem to need, the provision of those goods from the same place all the time is not a foregone conclusion.

Did you do all you could?