Saturday I attended the Nearly Impossible Conference in SF. It is the second edition of this event which is focused entirely on people and businesses that make stuff, generally consumer product stuff. From the one-man furniture studio to the thriving stationary company to all kinds of other people trying to navigate the B2C and B2B wholesale worlds.

There were a number of messages and awarenesses I came away with that are pretty interesting. There is nothing like going to a conference to have your perspectives confirmed, stretched or trampled.

1. There is far, far more opportunity for a maker or producer to monetize their work than ever before through the web. There are lots of low cost/no cost (in monetary cost) publicity vehicles like facebook or Instagram and places to find an audience. Just put up your pictures or your story or both, develop a following of admirers and they will buy your stuff. Maybe even dozens, hundreds or thousands of your stuff, whatever it may be. It does not need to be hand-crafted, only unique and carry a story of why it is special. We used to say “starving artists” however, if you have a craft or capability that you want to see out there in people’s hands or homes, do it directly. It’s not called the World Wide Web by accident.

2. Story might be more important than the actual product. A story that is authentic will build followers who admire the story. The product can be simple or not as long as it is “of the story” and therefore buyable.

3. There is a whole group of consumers now in the American and global population that will clamor for a product and a premium price, if the product carries a great story, which they will share with whomever they can. It was quite convenient that Apple introduced the latest iPhone on Friday to demonstrate that effect in a big scale way. People waited in line for hours in many cities to get what everyone else can have in a week or two, but those people just had to have it first. That does not mean they always stand in line for anything. What constitutes what someone is “willing to stand in line and be first” is not a personality thing as much as a craving thing. Therefore, it can’t be marketed to by a simple, old-school demographic. However, the web is the global craving tool.

4. The leap from creating product directly for an audience, call it maker to consumer/end user without a middle entity, to being in full wholesale selling product to resellers like stores is more complicated than ever before and the leap to get there is deceptively more expensive and time-consuming than most would expect in inventory, infrastructure, overhead etc. It’s not incremental, it’s an entirely different way to look at growing a business

In addition to these market condition changes, there were also some really valuable business building sessions. I highly r 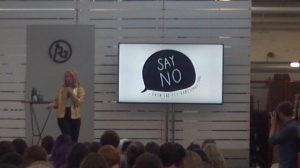 ecommend watching this video by Rick Klau of Google Ventures all about Objectives and Key Results. I’m very comfortable saying I have never heard the process of goal setting quite so tightly and neatly defined so as to be actually highly useful for an entire organization. This presentation should be viewed by your entire team of goal setting people because it is so awfully simple that most companies totally, TOTALLY complicate it and wind up getting nowhere near as far as they wanted to go. It’s a bit long at 81 minutes, but, worth every second.

There was a presentation by Jen Gotch which was a rambling view of her career and eventually her rules of doing business. The picture above pretty much tells the whole story. Say NO way, way more than you say YES to opportunities as they come. Opportunities are mostly fools gold lying in the river bed (my term – I am in the Gold Country of California). Be willing to say NO until you can discern what the real resource requirement will be and what the possible economic gain will look like (make sure it is real gold).

I met Katie Hunt the founder of Tradeshow Boot Camp who helps growing entrepreneurs migrate from the B2C to the wholesale arena. Her business has a great variety of resources with which a budding consumer product company can make smarter investments in growth by simply knowing what they are doing instead of learning as you go.

Now that I’ve talked to business owners, I realize just how important my perspectives on defining the other person’s point of view in advance actually is.