Business is just like football – It takes execution and great leadership

It’s College Football Season. You want to know the “secret” behind winning a championship?

If you’re at all familiar with football, there are 11 guys on the field who need to make all the right decsions in each given play, with someone directly opposing them trying to prevent it. It requires athleticism, endurance and lots and lots of decision making in changing conditions. 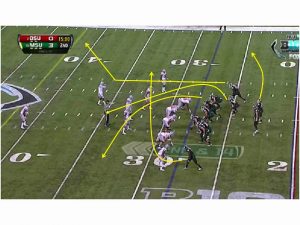 So, how do you win a championship in football? There are approximately 80 offensive plays in a modern speed game. The 11 guys need to make 880 better decisions than the other guys and execute them well. They need to do that on offense and defense. Therefore a game is 1760 decisions, by each team, ON the field. Combine that with all the decisions by coaches and staff on the sidelines, etc., and you’re way over 2000 decisions per game.

So to win the game, you need to make good decisions (better than the competition), execute them flawlessly and not poop out in the fourth quarter. No problem, that wins one game.

Keep in mind, any really bad decision or failure to execute could cost you any game along the way. One guy, losing focus for only 3 seconds costs your team a touchdown that eventually proves the difference in winning and losing.

To win that National Championship, the team needs to typically win 12 games, or to quantify, needs to make 24,000 individual decisions each of which is not necessarily life and death by itself, but, 1 loss of focus can cost you any game. Any loss can cost you the opportunity to win the championship.

High stakes indeed, but, that’s how you win a championship.

To create this incredible mix requires leadership of the highest caliber, also making hundreds, maybe thousands of top flight decisions, day in, day out. What to practice. Who to play. Who to sit out. How to ensure endurance. It goes on and on. And don’t forget the media and fans wanting to jump in and ask a zillion questions all the time.

Where is your leadership creating the level of execution in athleticism and endurance in your business? Are you associated with the top people? Are you at the top of your game at each of your presentations or shows, everyday, all day, until the very end? Do you make decisions to outwit the competition or make the lives of your Customers, Staff or Vendors easier all the time?

Want to compete for championships? You need to raise your game, every week! It takes great leadership to raise an entire organization’s game. Mediocre leadership achieves some wins and some missed opportunities. The sum of 1,000s of best decisions is the ongoing challenge. You can do it. First you have to choose to do it, commit to do it and then………..just do it, every day.

Now that I’ve talked to business owners, I realize just how important my perspectives on defining the other person’s point of view in advance actually is.